On the penultimate episode of JK Meshi the girl’s are going on a trip and we are introduced to Ryouka’s little sister Yuka.

With the girls expecting to go on a trip due to Ruriko’s aunt, they discuss what they can’t wait to do. Ryouka takes control of the conversation with her interest in basketball, as well as being the ace of the basketball team in saying she can’t wait to watch the Takamatsu Five Arrows. Though with introducing someone new, Ruriko decides to portray herself as someone reliable (at least when it comes to basketball), demonstrating her not so great dribbling skills and a three point shot (which she made). Ruriko decides however, that she could pull some strings so that Ryouka can meet her favorite team and players, whilst also giving them snacks. 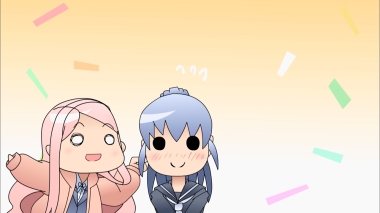 This leads to our dish this week, being Reina’s Three Point Chocolate Bar. It’s called three points because it has three different ingredients, marshmallows, marmalade and Ramen snack!? 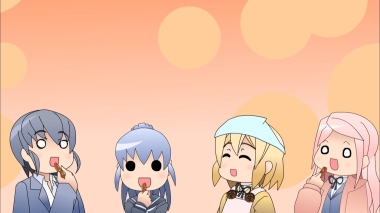 This weeks episode was a more of a set-up episode for the finale next week, with the trip being the main highlight. The dish this week could probably seen on the unhealthy side, and its combination of sweets and salty ramen may be questionable. Though in the end, there was a catch with Ruriko actually tricking everyone that they could meet the team, Teehee.