It’s back. Nisekoi again, another season of Ichijou Raku trying to find who his true love is. I was actually looking forward to this season after they announced it. It probably came in as my most anticipated show this season. I’d like to say that I have been keeping up to date with the manga as it is one of my favorites.

Ahhhh… harems, don’t you love them? :D. Nisekoi was another show that put a smile on my face whenever i watched it. Whether it be the bashful personality of Chitoge, Onodera’s airheaded-ness, Marika’s overwhelming love or Tsugumi’s strong yet easily breakable wall, it was fun to watch these characters develop. You know that “hnnnnnghh” feeling. With the introduction of Onodera’s sister, Haru it just added more fun to the show.

With very bright animation by shaft (and a bunch of head-tilts), Nisekoi became a bubbly anime full of exciting emotions and happy tones. The story further developed at points and some points it didn’t. But the interactions between characters were enjoying to watch as Ichijou Raku was placed in situation after situation as his feelings were tested by the girls.

The music did set the tone for the anime, with light bubbly tunes to match what was going on throughout the scenes. 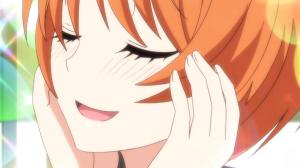 OP/ED: With a change in ED throughout the season, it was great to see as each song matched each girl and when the show focused on a specific girl. I really enjoyed the OP with LiSA’s vocals (I’m a fan), as well as the combination of the seiyuu’s of the girls singing for the 1st ED.

Nisekoi: Was it Good?

Nisekoi, the ever fun loving anime, with many easy going and light-hearted tones throughout the show, I could say it was a great watch. With heart warming feelings of accepting the show for what it is, it does it well. I thoroughly enjoyed it as a romance/comedy anime. The characters played the most important role within the anime and it was great to see Shaft capitalize on that throughout this season.

Nisekoi is a great romcom anime, as for what it is I believe its one of the best in its genre. With characters that you love and their interactions being the fore front of the anime, I recommend the following:

The most Important part: I would like to officially announce that I am:

4 thoughts on ““What team am I?” Nisekoi: Review and Recommendations”